Testosterone cypionate is a long-acting version of the parent hormone testosterone with an attached cypionate ester to delay its release into the body. Testosterone is the most potent, naturally occurring androgen that is formed in the human body. It is responsible for characteristics specific to males and their sexual traits.BackgroundTestosterone was first synthesized in 1935. Many pharmaceutical forms have been created since. Most major pharmaceutical houses such as Organon and UpJohn, manufacture Testosterone Cypionate, as do many underground labs.Steroid ActionWhen this long-acting version of testosterone is injected, it becomes stored in what is known as a depot in the body, and slowly released over a short period of time. Peaking within 1-2 days after injection, the testosterone is then steadily released over the next 12 days and completely tapers out after approximately 3 weeks.Testosterone is responsible for promoting health and well being through enhanced libido, energy, immunity, increased fat loss, gaining and maintaining lean muscle mass, preventing Osteoporosis (loss of bone density), and possible protection against heart disease. Testosterone is also responsible for normal growth and development of male sex organs and maintenance of secondary sex characteristics. Secondary s ex characteristics are specific traits that separate the two sexes, but are not directly part of the reproductive system, for example: chest and facial hair, a distinguished jaw line, broad shoulders and increased muscle mass. Testosterone binds to the Androgen Receptors (AR), which thus causes accelerated muscle gain, fat loss, and muscle repair and growth. These mechanisms are stimulated by activation of the Androgen Receptors (either directly or as DHT), as well as through a hormonal cascade. 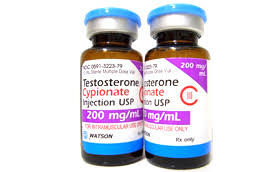 There are many possible side effects associated with the use of testosterone cypionate for sale. This product has a high level of aromatization into estrogen and coverts to DHT (dihydrotestosterone) as well. Estrogen is the female sex hormone, and too much of it can cause a high risk of gynecomastia (formation of breast tissue in males), water retention, and other undesirable side effects. DHT can cause male pattern baldness as well as acne.

Also, supplementing Testosterone to your body will result in the shutting down of the body’s natural production of the hormone. The severity of side effects depends mostly on the levels and duration of circulating free testosterone as well as its conversion into other hormones. Testosterone’s anabolic/androgenic effects (as well as side effects) are dependant upon dosage, and the higher the dose the higher the muscle building effect.

Testosterone Cypionate is one of the best mass building anabolics known to man and is a highly recommended as the base of any mass building cycle. An effective dose of this drug for a man is between 200-2000 mg per week. An effective dose for a woman (wanting to become a man) is similar. Other women (i.e. those not wanting to become a man) should avoid this compound.

Overall, the most common effect reported by subjects using Testosterone Cypionate was gains in strength (1). Alterations in size, shape, and appearance of the muscle were reported (2).

The degree of effects typically experienced with Testosterone use depends on dosage. Generally, the higher the dose used, the better the results, yet more potential for side effects due to higher amounts of androgens in the body. (3). Its been suggested strongly through studies, that doses as high as 600 mg per week produce greater results verses those who received lower doses. At the highest dose, (600 mg/week), the best results were achieved. At this dosage, results reported were: fat loss, muscle growth, lowered HDL cholesterol and increased size and strength (4). There was (roughly) a 15% gain in Lean Body Mass achieved through 20 weeks of 600 mg/week of Testosterone therapy.

Testosterone Cypionate is the most commonly prescribed form of testosterone in the United States of America. In fact, it is a bit of a rare find outside of the USA, with most places in the world deferring to the very similar Testosterone Enanthate.

In truth, I’ve used both and find no difference at all between the two. Testosterone Cypionate is identical with regards to results to any long acting testosterone. In the original Underground Steroid Handbook, Dan Duchaine said that users could feel more “kick” from this form over Enanthate, but I honestly haven’t found that to be true personally.

The prime advantage of this product is the fact that Testosterone Cypionate can be injected once per week and it gives some very good gains in strength and size. I would bet that many careers in bodybuilding and athletics were built with the long term use of this drug. I’ve used it at doses of 250-2,000 mg per week, and found that the best gains versus side effects are probably had somewhere below the 750 mg/week mark. Of course this is far below what many competitors in the upper ranks of bodybuilding use, but for the average (recreational) bodybuilder or athlete, the side effects above this dose do not constitute an acceptable trade off for the gains.

Now that anabolics are controlled, this is an almost impossible find. In general, the only versions you’ll find on the black market are Sten from Mexico, which contains 75mg cyp with 25 mg propionate along with some DHEA, and Testex from Leo in Spain which contains 250mg cypionate is a light resistant ampule.

All versions of Upjohn and Steris in multi-dose vials should be looked at with extreme caution as they are very difficult to get on the black market. Counterfeits are quite easy to obtain.